It was starting to get cold after the sun went down — not like a Midwest winter night, but chilly, even in our bulky MOPP gear issued for protection from biological and chemical attacks. My section of TOW missile-equipped Humvees had just been attached to an infantry company less than 20 minutes earlier. We were to follow them to an intersection a few klicks south of the only bridge over the river Basra, into the city of Basra, for many kilometers east and west. At this intersection, we were to set up a security for a blocking force of tanks to occupy until the Brits took it over the next day. My section never made it to the intersection that night.

In the first of many detailed journal entries — this one aptly titled “That First Night” — U.S. Navy Corpsman and Onawa, Iowa, native Matthew Clayton describes the series of events that took him completely around the world by plane, Humvee, on foot and by ship, going through every time zone on the planet. 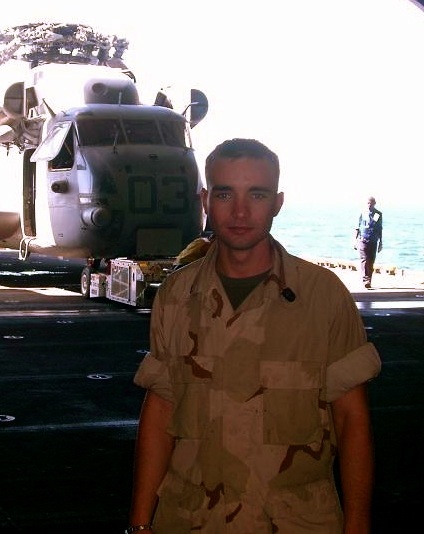 The bulk of his writing, however, focused on the 40 days and 40 nights he spent in Iraq, fighting side-by-side with soldiers on the frontline of the war.

As a Navy hospital corpsman who served with the Marines, Clayton joined the ranks of John Bradley, the young Navy corpsman who, along with five other soldiers, raised an American flag on Mount Suribachi after the Battle of Iwo Jima. Trained as specialists in combat medicine, Navy corpsman go into battle with Marines and provide life-saving aid to those wounded in combat — including the wounded enemy. Clayton’s TOW platoon served with the Marine Corps’ 1st Tank Battalion.

Stationed permanently in Twenty-Nine Palms, Calif., the 28-year-old returned to Iowa earlier this month to spend time with his family and friends.

The son of Kim Berens, a nurse, and retired Marine Lance Clayton, both of Onawa, he also is this writer’s nephew. We talked about the war and that first night, where a small barking dog, Iraqis with AK-47s, one little boy, and pitch-black conditions set off a chain reaction of gunfire and what Matt called “archetypal gut reactions.”

What set off the events that night?

We had halted to do reconnaissance on a junkyard-like complex of buildings and above-ground fuel tanks, and my vehicle was stopped in the driveway of a darkened residence with a chain link fence. A dog emerged from the fenced area and ran around our vehicle, barking, while over radio traffic in my helmet I heard there were four dismounts (Iraqis) carrying AK-47s about 300 meters to our northwest. They were moving quickly from berm to berm and coming towards us, using cover and concealment.

Powerful line charges are used to clear a minefield on a road near Baghdad.

Then, I saw a faint outline of a person standing next to one of the smaller buildings, and, my hands on the trigger, yelled something like “Freeze!” but he disappeared with only a sidestep. I heard him call for the dog, and when a pickup passed by, the headlights showed a young boy — who couldn’t have been more than 10 — holding that dog. We’d dropped millions of flyers telling [the civilians] to stay inside, and here I’d almost blasted a young boy the very first night of the war.

4 Alpha, a wingman, yelled that the dismounts had just gone prone, and that one was aiming his weapon right at me. He said, “Kill him! F— (expletive) — he’s firing!” And just as I heard 4 Alpha say that last, I saw two orange streaks zip through trees high and to my right. We jumped into our vehicle and floored it… we were bringing the heavy gun back to support the others. Sgt. Miller, our section leader, screamed “4 Alpha, direct my fire!” and before I even pondered what was about to happen, a .50-cal machine gun started belching hot lead right above my head. We eventually exterminated them with extreme prejudice. The carnage and destruction resulting from their deliberate and accurate fire are burned into my memory forever. 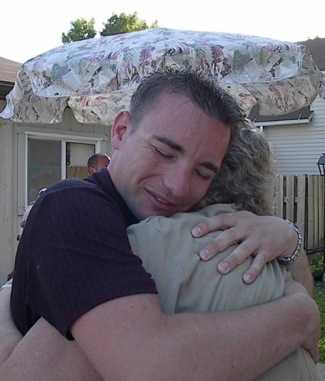 Matt Clayton hugs his mother, Kim Berens, during a visit home to Iowa after his return from Iraq

It was actually really sad. The people of Iraq could and should be one of the wealthiest countries in the world because of their oil reserves. But almost 95 percent of the people lived in total poverty, just squalor, shacks, barefoot, rags for clothes, no electricity, hand-pumped water out of ground wells. That was virtually all the country that I saw except for in Baghdad.

How would you describe the pulse of the country in Baghdad?

There was just overwhelming joy everywhere we went. No Iraqi civilian ever had a bad word to say to any of us at any time. Parents would come out with tears in their eyes, carrying their babies, thanking us for giving their children a chance at a better life.

Baghdad is not like a third world at all. It’s industrialized, and all that was just taken away from them. They’d tell us which schools had caches of weapons and where people were selling guns. Kids would actually bring pens out and want us to autograph their hands or their soccer balls. You’d see 50 or 100 servicemen’s names on it already from other units that had been on patrol. It felt very strange.

Did you and other troops ever discuss why you thought you were there? 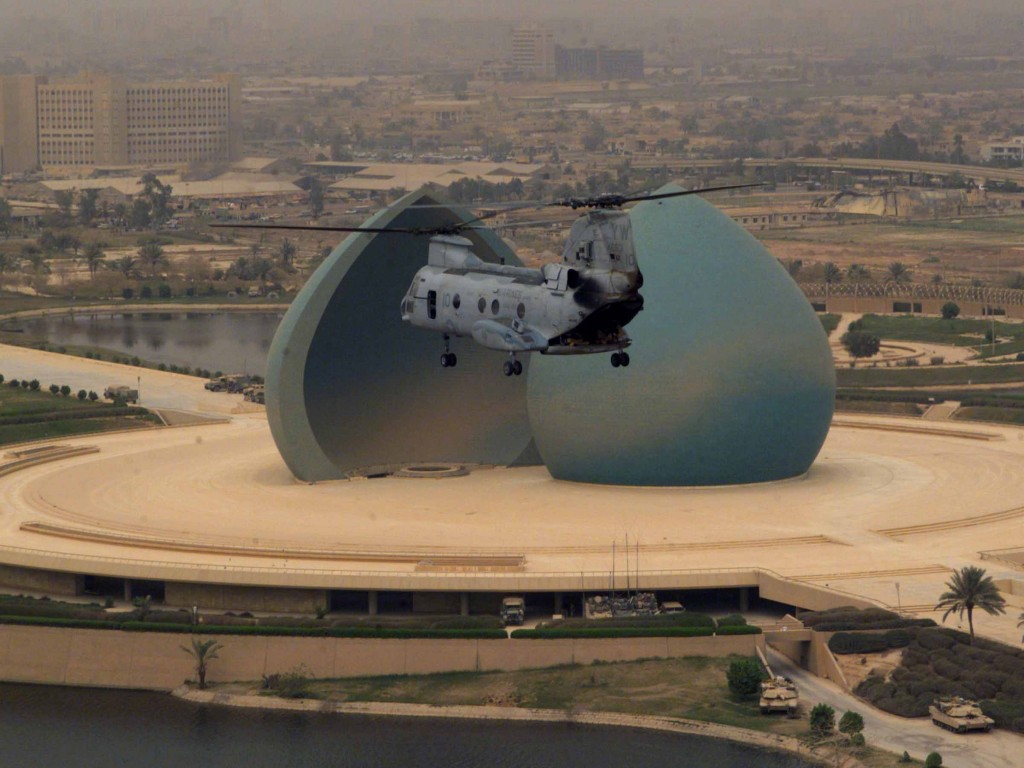 The Iran-Iraq memorial in Baghdad where Clayton's battalion set up a tactical operations base.

Oil, plain and simple. That was the general rumor amongst the troops before we left. We listened to Bush, and even when he did the you’ve-got-48-hours thing and gave that speech, we listened to it on the radio in Kuwait, and all the Marines in my unit were like “Bullshit.” He was talking about this “axis of evil,” and “terrorists” and “weapons of mass destruction,” and we’re like, whatever. We’re going over there for oil and we all know it. In fact, instead of “Operation Iraqi Freedom,” someone in my platoon made up a big sign that said Operation Iraqi Liberation with the first letters of each word in bold print and underlined so the sign clearly read OIL. Our platoon commander made him take it down.

Despite the reasons you felt you were there, did you feel most Americans supported your efforts or did it feel like Vietnam all over again? 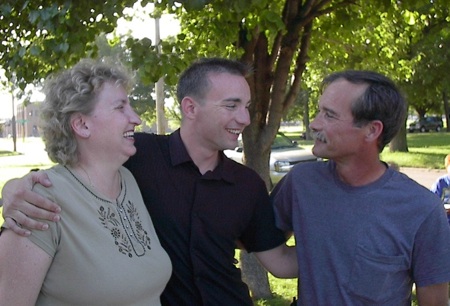 Matt with his mother, Kim Berens, and father, Lance Clayton, during a visit home to Iowa after first returning from Iraq.

It felt like the people were behind us for sure, but we really had no contact. We got mail only twice while we were in Iraq. We never had a sense that we were going to come back and be called baby-killers or things like that. Everyone was extremely supportive.

What did you fear most while over there?

First and foremost, getting killed. When we first crossed over from Kuwait into Iraq, we didn’t want to get attacked by gas or slimed by chemical weapons. We had superiority as far as technology and equipment and numbers — and morale — so the chemical stuff was really on our minds at first, but then as we went more and more, about 80-90 percent of their entire armed forces just deserted the very first night we were there.

So the morale was good?

I don’t think morale was ever bad, but we were a bit anxious to get home. After we left Baghdad, we were camped out in southern Iraq waiting for these heavy equipment trucks to come and pick up the tanks. After our mission in the country was done, we were just waiting to get out and it was a little bit worse. We hadn’t had a shower for 40 days. We were ready to get out of there.

What are your plans for the future? 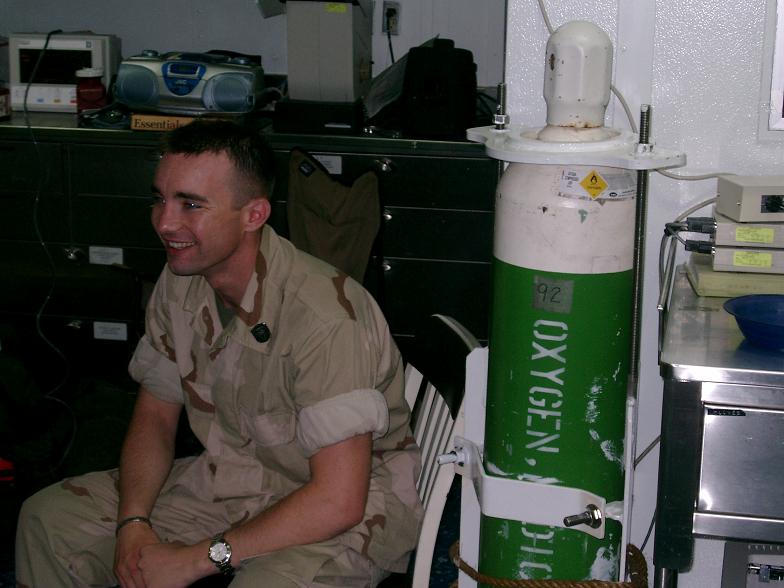 I have two years left in the Navy and I’ll probably be with the Marines those two years. Right now I don’t plan on reenlisting or extending. I really liked it except the war thing kind of turned me off. I’m a senior in college, and am going to finish my mathematics degree and use my money from the Navy and the GI Bill to get my masters. I want to teach math or algebra someday, most likely at a community college. I’m not sure where I’m going to go, but you can teach math anywhere in the world.

Excerpts of this article first appeared in the Weekender on August 21, 2003.

* Author’s postscript to this story: Matt Clayton, like many others who spent time on Iraq’s frontline, has battled severe Post Traumatic Stress Disorder (PTSD) since his tour in Iraq.

In May 2010, he was scheduled to sit down for a visit with U.S. Senate candidate Bob Krause and Iraq veteran Maria Deike to discuss war vets’ ongoing needs and the difficulties they face recapturing former dreams and lives. Krause — a retired lieutenant colonel and former Iowa Democratic Veterans Caucus Chair — has worked tirelessly to bring to the forefront important veterans’ issues such as PTSD, substance abuse and homelessness.

Although the event was cancelled due to unforeseen circumstances, Krause went on to spearhead the Veterans’ National Recovery Center, an “integrated services center that provides training, counseling, personal connectivity and environment to on-site residents in order to lift even the most discouraged homeless veteran off of the floor of life and place him or her in a sustainable home environment.”

Matt is currently exploring ways he may be able to contribute to the project.