Powerful line charges inform us the path is clear

The fastest way to complete any mission will always be to hunt for and gather information, or intelligence, on its objective AND every obstacle that could present itself as you proceed towards it. You can filter intelligence passively, which is more akin to gathering, but to find the diamonds, you have to dig or hunt for them. We call that recconissance.

Typically, a very small, specialized team will be dispatched, make their way to somewhere, do their job and return. Sometimes though, in the middle of things, when intelligence is most critical, there is no time for such methods. Luckily, during such instances, only one piece of information is crucial.

“Delta Four” he heard over the batallion channel, in his right ear. “I’m not quite sure, but through the thermals it looks like we got four or five men behind that row of farm structures setting up two mortars.” It was the middle of the night.

“That’s looking through at least one building, Four.” the Company Commander queried. “Are you sure that’s what they’re doing.” Marines are fantastic killers and perversely beautiful in action, but believe it or not, they kill ONLY (and most) who would first kill them. That tends to discourage resistance.

“Delta Four, Sir I’m watching a stream of piss commin’ out of one of ’em right now. I’d bet my fuckin’ Bloodstripes that’s a mortar tube, almost set, pointing up right next to him. Request reconnissance by fire, over.”

“Delta Four, send it.” came  the CO’s permission over the hooks, shortened to an order. Instantly Delta Four’s tank’s main cannon reported a majestic boom. A one-two-zero millimeter high-explosive round had exited her barrel at around eight-thousand feet per second. Of course, a calamitous explosion thereafter followed, faster then where his eyes could focus, and so white-bright that he could see an imaginary-giraffe-shaped cloud floating far above in the sky for a few split seconds. (Seriously, he couldn’t make this up)

“Alpha,” his TOW sectcions lead driver narrated over the SECTION channel, which fed into his left ear. “JESUS FUCKING SHIT MY CHRIST! Scratch three structures at 2200 meters.” Alpha squad of his section was located four HUMVees ahead and was topped with a TOW missle launcher. These elder, but still ruthlessly effective anti-tank weapons are equipped with a heat-sensing sight system like the Abrams tanks.

“Delta One, Four – status.” the Major asked. You may notice Commanding Officers questions are written with periods.  A question mark, unfortunately, might convey some notion that time may pass before an answer. Periods are much more imperitive. (haha, yea, WTF-ever, proceed)

“Delta Four, sir my scanning field of fire is clear of any threat.”

“Delta One copies no theats. Over.”…

I never saw a Marine enter a room unless two or three grenades had reconnoitered it first. Reconnissance by fire: if your not sure, make sure it’s not. Learn it. 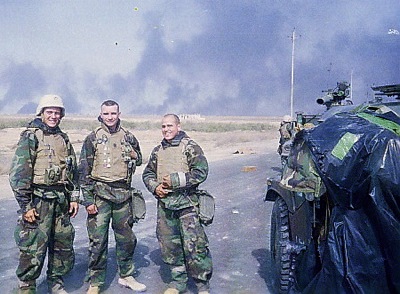 Some "investigating" happening behind us.

View all posts by Matthew Clayton →

One Response to Reconnissance by Fire